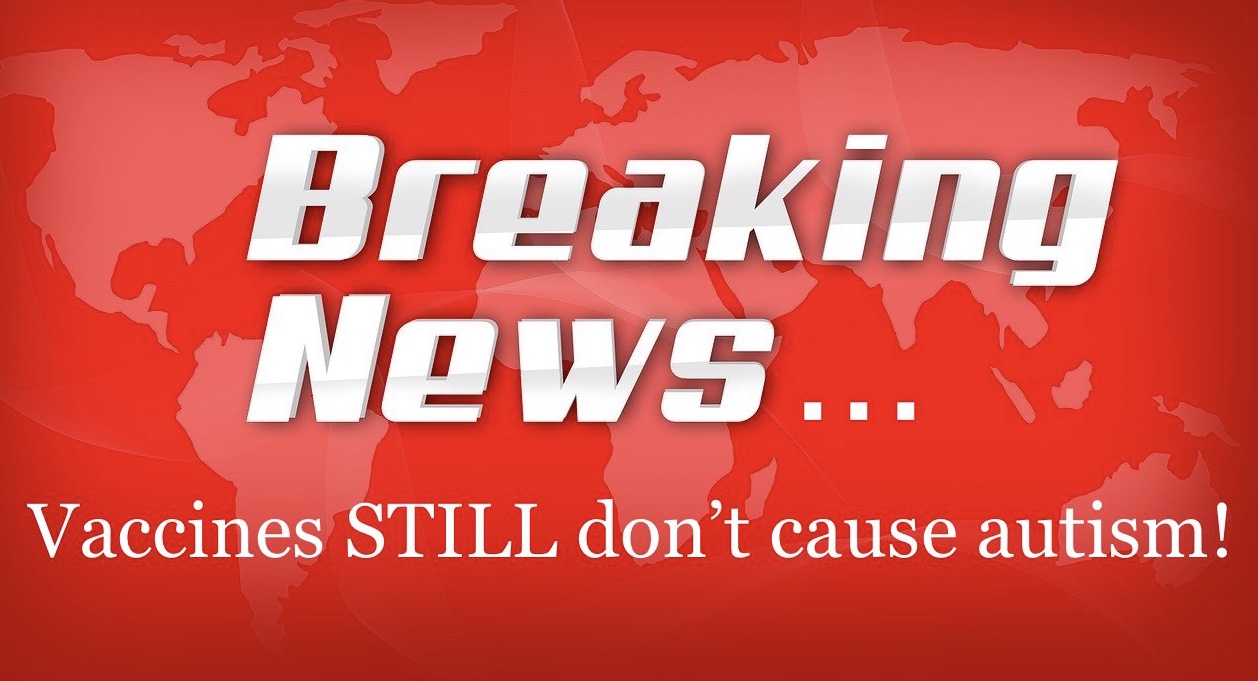 I am SOOO over the “vaccines cause autism” claim.

One of the amazing things about science is that it entertains all ideas. It is welcoming of all hypotheses. In fact, testing hypotheses is what science is all about. But what makes a thing true (in scientific terms) is not how you or I feel about a theory. It is whether the findings proving that theory are reproducible. Do the overwhelming majority of studies, each separately conducted, come to the same conclusion? There are studies out there, some of which are used by the anti-vax crowd, that may suggest a particular outcome or another. But if those findings cannot be reproduced over and over again, in study after study, then they are not scientific truths.

This is why we doctors and scientists and others involved with public health get SO DAMNED FRUSTRATED by the continued assertion by those in the anti-vax community, despite all evidence to the contrary, that vaccines cause autism. Numerous studies, involving millions of children, show NO relationship between vaccines and autism. And it doesn’t matter whether the assertion is that it’s the aluminum in vaccines or the number of vaccines given or the age at which vaccines are given. These studies all come to the same conclusion. VACCINES DO NOT CAUSE AUTISM. 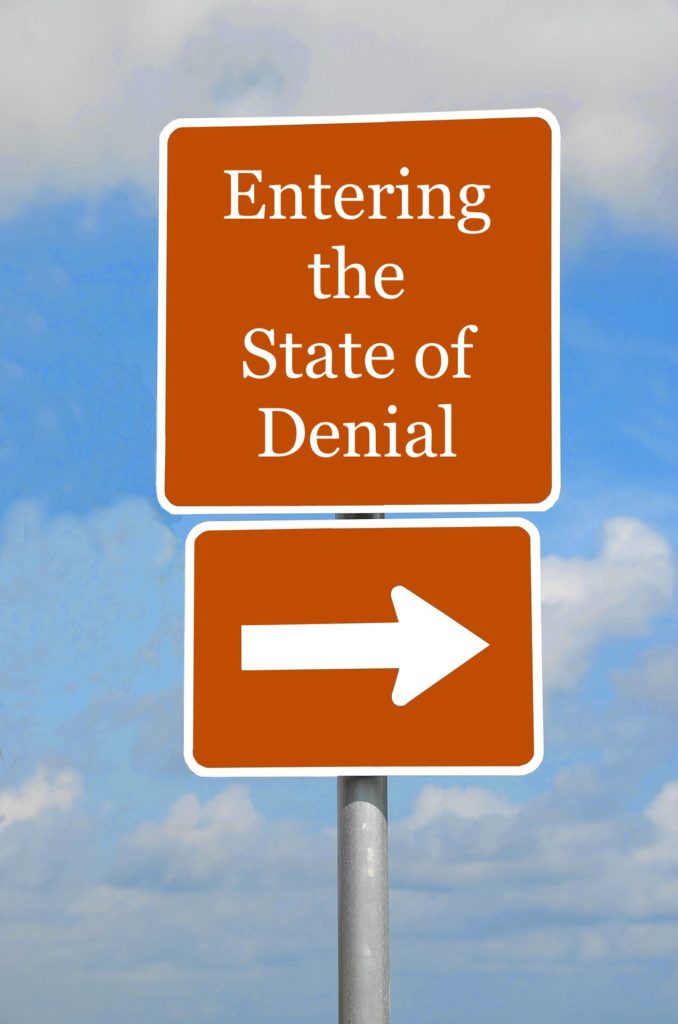 But this proof doesn’t seem to matter to anti-vaxxers. They claim to want to see the studies but then, when you show them the studies, they don’t believe them. Instead, the counterargument is “I know my child and I know this to be true”. The trending hashtag (which seems to trump science for some people) is #BelieveMothers. But becoming a mother doesn’t suddenly make one all-knowing.

I get it that not having a clear answer about what causes autism is HUGELY frustrating. It doesn’t sit well with parents, who desperately want to know a reason why. Autism is truly so hard for some families. I know this. But continuing to make the assertion, when science has proven time and again that autism is not caused by vaccines, only serves to stifle progress in determining what does cause autism.

I just finished reading Dr. Peter Hotez’s book, Vaccines Did Not Cause Rachel’s Autism. It is an excellent read by a highly knowledgeable individual. You should check it out (and, no, he did not ask me to say this). Dr. Hotez speaks with the authority of someone with a scientific and medical background (he is an MD/PhD in Pediatrics). As a developer of vaccines for neglected tropical diseases, he has a deep understanding of vaccine production. Additionally, he has the incredible life experience of being a father to a child with Autism Spectrum Disorder (ASD). If anyone has reason to want to find an answer to what causes autism, it is Dr. Hotez. 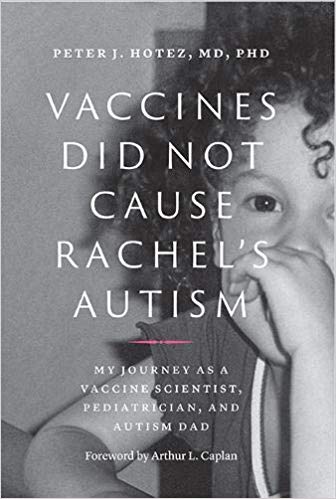 Yet in his book, he voices the same frustration that many in the autism community express. To address the claims of the anti-vax community, researchers are forced to continue spending time, effort, and money repeatedly disproving a vaccines-autism link. These are resources that would be better used to study what factors do contribute to autism’s development; resources that could fund research into early interventions that might help children with autism thrive and have the greatest chance of leading productive, meaningful lives.

Let’s move on, people, please. Let’s believe in science again, shall we? After all, we wouldn’t have cures for cancer or travel to space or buildings that can withstand hurricanes or TV or radio or the lightbulb if it weren’t for science. We rely on science every single day of our lives. The science that gave us these advances is the same science we use to test theories and claims about vaccines. And science proves that VACCINES DO NOT CAUSE AUTISM (if you didn’t hear me loud enough the first time).

Check out Dr. Hotez’s book here and, for other great vaccine science reads, check out my list of recommended reading here.

Also, this month is #VaxFactsFebruary! If you are interested in learning more about vaccines, I’ll be sharing vaccine facts on the regular. Follow me on Twitter at @GretchenLasalle to learn more!

2 thoughts on “Enough with the “vaccines cause autism” claim already!” 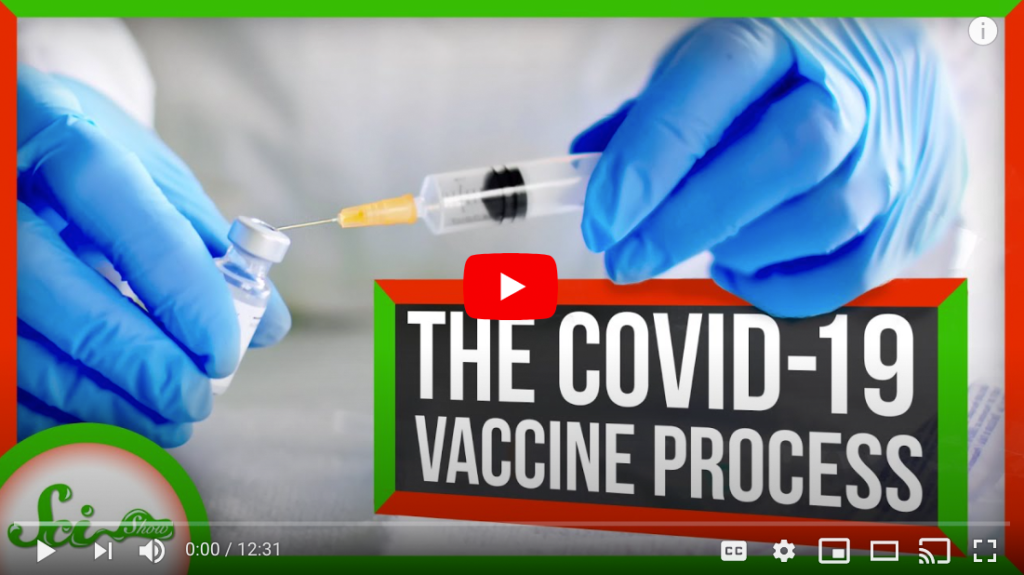 Follow this link to see why producing a coronavirus vaccine takes a year to 18 months. Presented by the SciShow.
» See prior posts